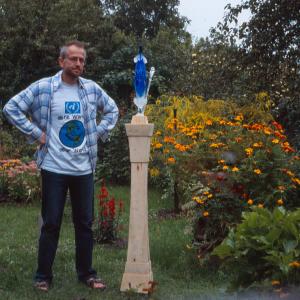 Maciej Dyszkiewicz was born In Warsaw (Poland) in 1959. His first experience with glass was through his father, who thought him the stone wheel Engraving. Maciej was apprenticing this technique between 1977-1984 In 1986 he came to Canada and set up a little glass engraving shop of his own. After few years of doing it part time he decided to become a full time glass artist. He took the glass courses in School of Craft and Design at Sheridan College between 1990-1993 While still being a student in the glass program Maciej has started to teach the glass engraving at Sheridan College. After many years of teaching he moved back to Poland and from 2014 he is a freelance glass artist working in Cracow.

Try-before-you-buy with a 3 month rental. 100% of your rental payments go towards the purchase (interest free). Message the artist directly, and start the conversation.

We make it easy for you to try art with smart payment plans and try-before-you-buy models.

See How It Works

Artwork protection is included on all art rentals up to $5K. Our Customer Care team is always here to help.

1% from every transaction goes towards SKETCH WORKING ARTS.